Spanish translation below the English is by Daniela Toulemonde.

China Miéville’s Three Moments of an Explosion was bumped up on my to-read list because one of the stories in the collection, “The Dowager of Bees”, was a finalist for the 2016 Locus Awards. Even though “Dowager” didn’t win (See that list here.) I bought the book because I haven’t read Miéville for some time and I really loved Embassytown, so I thought why not.

Now I remember why I haven’t read any Miéville for a while. I’m really not smart enough to read Miéville without sincere effort. END_OF_DOCUMENT_TOKEN_TO_BE_REPLACED

Spanish translation below the English is by Daniela Toulemonde.

There’s at least a half dozen reasons to encourage you to read The Fifth Season by N.K. Jemisin, but this post is not a review because, well, I’m about a year late, and there are already great discussions about it here and here. Also, if you’ve read the novel, see Jemisin’s post on it here. This is just a meandering and exploratory post on one aspect of the novel that made me think. It’s the issue of violence.

Everything in this novel creaks and snaps with violence. On the geological front, the earth in The Fifth Season is always erupting, ripping, collapsing, swallowing itself. “Father” earth is not friendly but is interpreted as destructive, unreliable and even evil because the planet goes through repeated cataclysms, known as the fifth season, that crush civilization over and over again.

On a socio-political level, Jemisin’s portrayal of oppression of the orogenes is illustrated in the society at large through depictions of discrimination in the ruling institutions, the elites, and among the common people whose fraught existence in this ever-changing world does not predispose them to kindness toward anything unpredictable, and the orogenes are all that. The novel is full of people of various ethnicities but the orogenes are found across all groups, making this an interesting depiction of oppression that is not confined to the racial framing we generally see. The physical diversity of the oppressed does nothing to diffuse the violence directed against them. END_OF_DOCUMENT_TOKEN_TO_BE_REPLACED 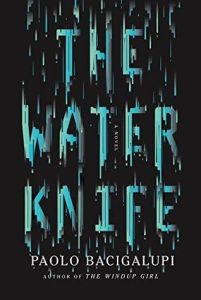 Let me say up front that I am in awe of Paolo Bacigalupi’s skill as a writer of ecological science fiction. Water scarcity! How’s that for a topic that could put the most avid science fiction reader to sleep? It takes a talented writer to make anyone crack a book on such a topic, and Bacigalupi has done it with The Water Knife. The novel has been nominated for the 2015 Goodreads Choice Award for Best Science Fiction.

The Water Knife cuts closer in time than Bacigalupi’s last novel The Windup Girl (reviewed here) and puts readers into a  pre-apocalyptic American West that we could actually live to see. The climate is undergoing a downward spiral of change, and water is scarce. The federal government has limited influence over desperate state governments and populations migrating toward any promise of water. Humanitarian aid organizations throughout the south and west build water pumps that sell water by the liter to the public while robber barons build climate-controlled luxury resorts for the rich. END_OF_DOCUMENT_TOKEN_TO_BE_REPLACED

Note: This is the sixth of seven reviews of this year’s short story nominees for the Nebula Awards.

Usman T. Malik’s short story is altogether different in nature and atomic structure from the other Nebula nominees. I doubt I’m capable of doing justice to this story, and I probably should have just read other reviews, but I didn’t, so here’s my take.

“The Vaporization Enthalpy of a Peculiar Pakistani Family” (first published in Qualia Nous (2014) edited by Michael Bailey) is many things, but most of all it is a warning–knitted together in science speak and religious philosophy with a satisfying, if enigmatic, ending. Though it is not the easiest story to digest on the first read, I felt my effort was very well rewarded. END_OF_DOCUMENT_TOKEN_TO_BE_REPLACED

Writer of speculative fiction. Reader of the same and more. Designer of gardens. Collector of keys, books, seeds. For more, see the "About" page.

Journeys in Space, Time and the Imagination

Journalist and Writer based in India

Indian Literature in languages other than English.

A Narcissist Writes Letters, To Himself

The Advocates for Human Rights works locally and globally to fight injustice, restore peace, save lives and build the human rights movement.

Omenana is a tri-monthly magazine that is open to submission from speculative fiction writers from across Africa and the African Diaspora.

"There is some good in this world...and it's worth fighting for." ~ J.R.R. Tolkien