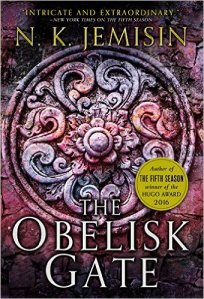 When I reviewed The Fifth Season, the first novel in N.K. Jemisin’s Broken Earth trilogy, I focused on what the violence in the novel was telling us and how the idea of violence shaped the story and the reader. The second novel in the series, The Obelisk Gate, is about love and hate, the fundamental motivations for all actions. So, if you’re up for a conversation about that, read on–just know that there will be spoilers.

Our hero from the first novel, Essun, is still in the underground community of Castrima where we left her at the end of the first novel. She’s a bit lost herself because she lost her daughter’s trail and doesn’t know how to find her, but she also has found a few people (and others) who care for her, and a place in a community that knows she is an orogene and tolerates her presence nonetheless. Her old love Alabaster has made it to Castrima as well. He is dying after having caused the rift that has brought on a season of destruction, but he tries in his impatient, imperfect way to teach her what she needs to know to finish what he started. No, the objective is not destruction of the world. The objective is an end to the seasons and re-establishing the planetary balance that will make it possible for humans (and others) to thrive again.

The novel also follows Nassun, Essun’s only daughter and surviving child, on her journey south with her homicidal father. Nassun is just leaving childhood, physically, mentally and emotionally, and Jemisin does an outstanding job of portraying the capacities and vulnerabilities of a girl that age. We see her navigate the unstable terrain that is her father’s mind–a man who could bludgeon her three-year-old brother to death because he discovered the boy was an orogene, yet tenuously hangs on to Nassun to take her somewhere he’s heard she can be cured. Why? Love. Twisted, damaged and smashed love. Nassun valiantly attempts to keep the image of her father in her heart and mind despite what she knows about him. Why? Love. The other parent, Essun–the one who pushed her as a child, hurt her so she would know how to protect herself, the one who is not there–becomes an object of hate, though the child does not clearly acknowledge this as her fear and desperation turns her in that direction. END_OF_DOCUMENT_TOKEN_TO_BE_REPLACED

It’s been really hard for me to keep posting recently because I’ve been caught up with living, you know, and processing the political times we live in. Any time that I am too consumed with thoughts and actions in the here and now, my writing suffers, and because of my vow to never let the WIP work suffer, I had to leave the blog for a while. I’m not sure whether other writers (and readers) have this experience, but I am very conscious of how reality affects my thinking, my moods, and ultimately my writing. I am still wrestling with all of this turbulence, but I ran across a short story that inspired me to try writing something in second person point of view (POV) and, if you’re writing, you might find you want to try it, too.

There’s a fantastic little short story, only 2500 plus words, in Clarkesworld this month that inspired me both as a writer and a reader. “Of Sight, of Mind, of Heart” by Samantha Murray is a tender story of a mother reflecting on her firstborn child’s first year. The child’s development is spectacularly rapid. The reader realizes some unspecified deal has been struck between the mother and unseen authorities that has resulted in the birth of this child. There is a war. The world is threatened. The mother’s voice is laden with guilt, and love. END_OF_DOCUMENT_TOKEN_TO_BE_REPLACED

It’s been a great month of reading and thinking about this year’s short story nominees for the Nebula Awards. (My reviews of the nominees can be found in the March and April 2015 archives on this blog.) I hope I’ve learned something about writing speculative fiction from seven impressive writers, but I’ve definitely enjoyed the trip to seven different, fully imagined worlds that drew me in, carried me along and left me a happy reader.  I thought it was interesting that the concept of family featured so clearly among the nominees. It is a prominent theme for five of the seven stories, maybe six, if you accept that the love of an undead man and woman meets the criteria of a family.

The obligation to ancestors, the loyalty of siblings, the pain of familial betrayal, secret inheritance, the process of maturing, fear for the well-being of children–it’s all here in these stories. For those who turn up their noses at speculative genres and think that science fiction, fantasy and horror are only about space ships, aliens, elves and vampires, there’s no better rebuttal to this prejudice than a critical read of these nominees. END_OF_DOCUMENT_TOKEN_TO_BE_REPLACED

This review of “The Breath of War” by Aliette de Bodard is the second review of the seven short story nominees for the 2014 Nebula Awards. As you know from earlier posts, each story gets two reads. The first read is my measure of overall satisfaction with the story. The second read is more critical and a chance for me to reconsider my gut reaction.

The first read of “The Breath of War” pretty much hit my gut like a nice balanced meal I might pack for lunch at work — protein, vegetables, fruit — no dessert.

The story is set in a place that I interpreted as something like a mountainous, other worldly Southeast Asia. This world, Voc, is recuperating from a civil war. Our pregnant protagonist is a woman named Rechan who is nearing her due date. She is on a critically important journey into the mountains to meet her breath-sibling, a being who becomes sentient when an adolescent carves one from native stone (a common practice on Voc). There is a lifelong bond between the carver and her breath-sibling, who, in addition to ensuring babies breathe at birth, become part of the extended human family. END_OF_DOCUMENT_TOKEN_TO_BE_REPLACED

Writer of speculative fiction. Reader of the same and more. Designer of gardens. Collector of keys, books, seeds. For more, see the "About" page.

Journeys in Space, Time and the Imagination

Journalist and Writer based in India

Indian Literature in languages other than English.

A Narcissist Writes Letters, To Himself

The Advocates for Human Rights works locally and globally to fight injustice, restore peace, save lives and build the human rights movement.

Omenana is a tri-monthly magazine that is open to submission from speculative fiction writers from across Africa and the African Diaspora.

"There is some good in this world...and it's worth fighting for." ~ J.R.R. Tolkien